Last May I wrote a post on my experience with pollution while in China. The smog was, without a doubt, my least favorite part about spending a summer in Beijing. Not only are the extreme amounts of pollutants gross to breathe in and bad for the environment, they are also bad for our health. And since my 2012 trip, the problem certainly hasn’t been getting any better – a recent study estimated 670,000 people died from smog caused by coal consumption in 2012.

These deaths were linked to a tiny particulate pollutant (PM2.5) in smog that contributes to premature deaths from strokes, lung cancer, coronary heart disease, and chronic pulmonary disease.

To understand the level of pollution in China, it is helpful to look at a benchmark. According to the World Health Organization (WHO), the upper limit for safe pollutant levels of PM2.5 is 10mcg per cubic meter. In China, in the year 2012, hundreds of millions of people were living in areas with pollutant concentrations far above this level. In fact, 157 million people were living in areas with PM2.5 concentrations over 100mcg per cubic meter, ten times the WHO’s safety limit. Since 2012, the problem has only gotten worse.

The researchers behind the study were interested in putting numbers on the social and environmental costs of the heavy Chinese reliance on the fuel and the resulting pollution. The results are even more dim than one might have imagined – they found the combined cost of damage to environment and health to be 260 yuan (~45USD) for each ton produced and used. For a country that uses approximately 4 billion tons of coal per year, the expense is massive.

Despite the large monetary cost the researchers found, their estimate may still be too conservative. Although they took into account the health care costs of the aforementioned causes of death, they overlooked smaller but very common health issues caused by pollution, like asthma and other respiratory issues.

Li Guoxing, from Peking University’s School of Public Health, remarked in an interview with South China Morning Post: “The health cost [of the study] is only based on the premature death figures due to the limitations of our research data. It could be way higher if we also include medical costs for other chronic illnesses.”

Beijing clearly knows some work needs to be done. In lieu of the Asia-Pacific Economic Cooperation forum that took place a few weeks ago, the city tried to clean up its act in hopes it would help clean up the air. Flowers were planted, streets were swept, residents were encouraged to leave town, home heating was temporarily cut off, and factory production was ordered to be delayed or stopped, among many other measures. This was the biggest international event to take place in Beijing since the 2008 Olympics, and China was ready to pull out all the stops.

Beijing’s clean-up may have foreshadowed what was to come. On November 12, Chinese President Xi JinPing and President Obama announced an agreement to curb pollution. This agreement is being hailed as landmark – the US and China represent the world’s two largest carbon polluters, together accounting for 45% of the world’s greenhouse gas emissions. 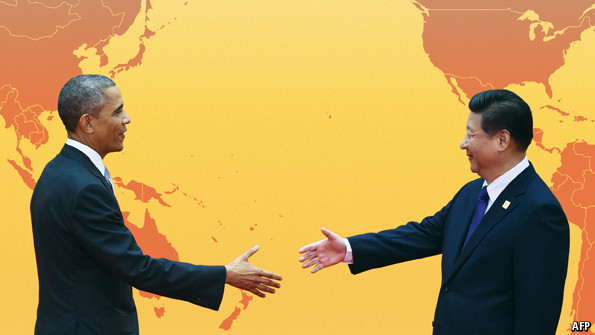 In the agreement, which has yet to be approved by the World Trade Organization, China pledged to put a cap on its quickly growing carbon emissions by 2030, as well as increase the amount of non-fossil fuels used to 20% of all energy used by 2030.

These ambitious goals are the largest steps China has taken to reduce it’s pollutant levels in recent history and the agreement is being widely praised around the world. Some, however, fear it is too late.

Can the agreement and the resulting goals make a real dent in the social and political costs of pollution in China, as well as around the world? It remains to be seen. What I am certain of, however, is that any move in the right direction is better than no move at all.